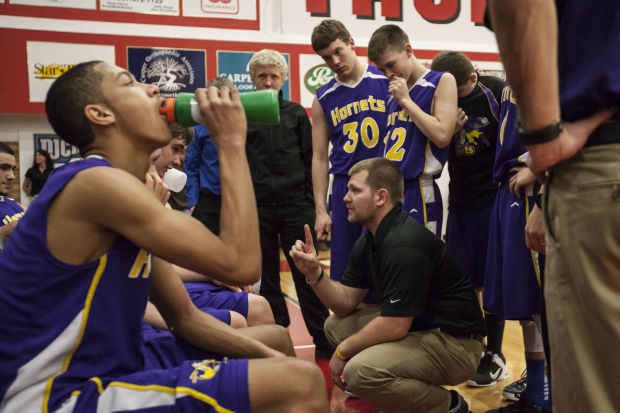 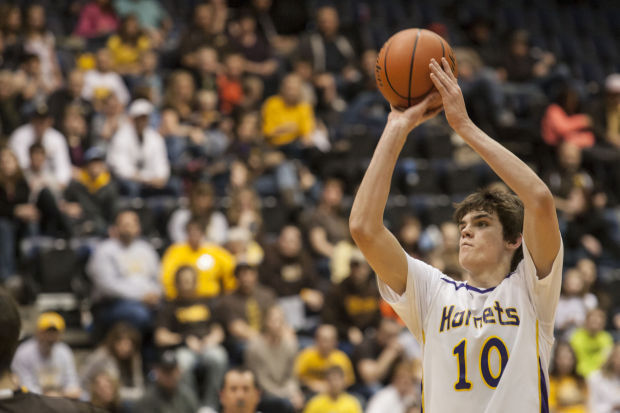 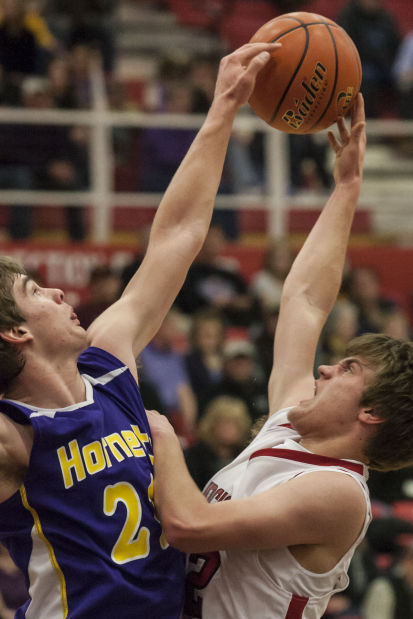 The 2014-15 high school basketball season is just beginning, but the Pine Bluffs Hornets already have a jump on the rest of the teams in the state.

The Hornets began preparing for this season immediately after their 71-64 double-overtime loss to Rocky Mountain in last year’s Class 2A state semifinals.

“We started getting ready as soon as we stepped off the court after that game,” 6-foot-9 Pine Bluffs sophomore Hunter Thompson said. “That double-overtime loss was probably the stepping stone of us coming together as a team. This season is all we’ve been talking about since March.”

And for good reason. The Hornets return all five starters, including all-state selections Thompson and 6-2 senior Scott Gross, from last year’s 17-12 team.

Third-year head coach Will Gray knows his team has to focus on the regular season first, however, before it can concern itself with the postseason.

“It’s a long season so we know we have to go through a process of getting better every week,” he said. “Like every other team we have to work out some kinks and we have to get our rotation set. Everything we do is to make us a better team at the end of the season.”

While all that is true, early indications are that Pine Bluffs could be a step ahead of the competition to start the season. Gray said the Hornets played well during summer camps and open gyms, and enter this season with a commitment to be the best.

Obviously, that’s the goal of every team, but after a year of playing varsity together, the Hornets feel they have the cohesiveness to make it happen.

“Last year’s team had never really played together so we didn’t really know each other,” said Gross, one of two seniors on this year’s team. “But now that we’ve had so much time playing together we know the ins and outs of how each guy plays and we’re starting to jive with each other.

“We’re at the point where we’re not just out there playing, but we’re breaking down defenses and finding ways to get the ball to the rim.”

Added Gray: “The chemistry is definitely there.”

Whether or not that chemistry can push Pine Bluffs to new heights remains to be seen.

Being a championship contender is uncharted territory for the Hornets, who haven’t qualified for back-to-back state tournaments since 1997-98. In fact, last year marked just the third time since ’98 that the Hornets had advanced to the state tournament.

As far as winning a state title, Pine Bluffs hasn’t won one since 1983. Gray has made a point of reminding his team of that fact during practices.

“It’s crazy that we haven’t won a state title in 31 years,” junior point guard Harvey De La Cruz said. “But I think we can do it if we just make sure we stay calm and do our jobs.”

De La Cruz’s job on the offensive end is made easier by the Hornets’ myriad scoring options.

Thompson, who is already being recruited by Wyoming and such schools as Arizona, Stanford and Gonzaga, is in line to be the most sought-after prospect from the state in years. In addition, Gross is a force on the blocks and guards Preston Thurin and Trent Werner both have the potential to be double-digit scorers.

“It’s pretty fun,” De La Cruz said. “I can throw alley-oops to Hunter or run pick-and-rolls with Scott. And when those don’t work I can kick it out to Trent and let him shoot.”

With Gross and Thurin the only seniors on the squad, some of those options will also be available to De La Cruz next season. Gross acknowledges this, but he also knows the Hornets are focused on winning this season, especially after the way last season ended.

“I think we can continue to push our boundaries and see just how far we can go,” he said. “But it’s beautiful to see that the future is bright for Pine Bluffs basketball.”

EARLY FAVORITES: The Hornets return all five starters from a team that finished 17-12 and advanced to the state semifinals before losing to Rocky Mountain in double overtime.

HE SAID IT: “That double-overtime loss was probably the stepping stone of us coming together as a team.” – Pine Bluffs sophomore Hunter Thompson.

Get in the game with our Prep Sports Newsletter

Sent weekly directly to your inbox!