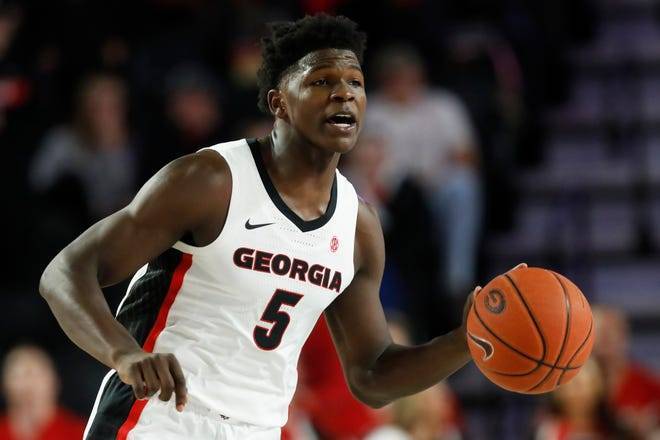 [Player Anthony Edwards] – (Georgia): The 6-foot-5, 225-pound freshman guard averaged 26 points, 12.5 rebounds, 2.5 assists, two steals and a block against Missouri and Texas A&M. Against Mizzou, Edwards pumped in 23 points and cleaned the glass on 10 occasions. In the next matchup against the Aggies, he went off for 29 points and 25 boards. These performances notched him in becoming the first Georgia freshman to achieve back-to-back double-doubles since Jumaine Jones did so during the 1997-98 season.

[Player Reggie Perry] – (Mississippi State): The 6-foot-10, 250-pound sophomore forward boasted an average of 25.5 points and 10 rebounds in wins at Florida and against Tennessee. Against the Gators, he scored a career-high 27 points with the help of shooting 3-for-3 from beyond the arc. He is ranked first for the Bulldogs in scoring (17.1 PPG) and rebounding (10 REB).

Missouri – The Tigers snapped their four-game losing streak with a close win against Georgia but since then have suffered back-to-back losses at South Carolina and Texas A&M. In their road matchup with the Gamecocks, Mizzou played without their second-and-third-leading scorers in [Player Mark Smith] and [Player Jeremiah Tilmon]. They clearly showed a struggling effort without the firepower of these two weapons as they have combined for an average of nearly 20 points and nine boards a game.

Alabama – The Crimson Tide have seemed to slip into a little slump right during the heart of conference play as they’ve dropped three straight games with their most recent losses being against Arkansas and Tennessee. After hitting their first two three-point attempts of the game, Bama went 8-of-31(26%) from three-point land for the remainder of the game. In this matchup, the Tide also lost key defender Herbert Jones who is out indefinitely with a wrist injury.

1. [Player Ashton Hagans] – The Kentucky guard leads the SEC in assisting his teammates has he’s produced 7.0 APG for a season total of 153 assists. Hagans has turned the ball over 75 times thus far averaging 3.4 TOPG as his AST/TO ratio lies at 2.0.

2. [Player Andrew Nembhard] – The stud sophomore guard comes in at second in the conference with 128 assists off of 5.8 APG. There’s a lower number of turnovers for Nembhard though, as he’s averaging just 2.6 a game putting his total at 58. His AST/TO ratio is a 2.2.

3. [Player Kira Lewis] Jr. – Lewis is a key factor in all facets of the game for the Crimson Tide. But as a passer he’s racked up 102 assists, averaging 4.6 per game. He has ]ne of the highest amounts of turnovers in the SEC with 88 total and on average about four times a game.

5. [Player J’Von McCormick] – One of the main reasons why the Tigers have played so well is because of Mr. McCormick. Like Lee, he’s got 100 assists and is averaging 4.5 a game. His turnover numbers are drastically lower though as he’s only done it 2.3 times per game putting his total turnovers at just 51.