Early in his freshman year at East Carolina University, Lance Tejada, the 6-foot-2 guard who had a prolific high school career, has proven his himself. He possesses talent and determination, both on and off the basketball court, and is likely in for a breakout freshman year in the American Athletic Conference.

Ever since he can remember, basketball was what he wanted to devote his life to. Born and raised in the Bronx, Tejada moved south to play for Blanche Ely, a powerhouse program in Florida perfect to showcase his evolving talent.

He played under his father throughout his grassroots basketball career, starring for the Florida Flash on the AAU circuit. He blossomed into an impact player, helping the Flash become a national contender while building his profile amongst the nation's top schools. His last season of AAU, Tejada joined the Southern Stampede, a Nike EYBL affiliate out of Georgia.

Surrounded by eight other Division I recruits, Tejada was asked to be a facilitator for the talented Stampede. Playing a bit out of his comfort zone, normally a prolific scorer, Tejada proved he is capable of being efficient everywhere on the court. The bullish-like guard averaged 9.4 points, 3.9 assists, 3.0 rebounds and 1.2 steals while maintaining a 1.9 assist/turnover ratio. Simply put, he proved himself as a high-profile recruit amongst the top talent in the country.

Citing his desire to be a program-changing player, Tejada chose to attend ECU instead of one of the basketball powerhouse conferences. Tejada’s talent could have taken him to many major Division 1 schools, but he chose to focus on the team dynamic and energy at ECU - while having the opportunity to be the face of a program. As someone with such talent, Tejada’s passion, devotion, and excitement for his time at ECU show qualities of a strong leader at such a young age.

We had a chance to sit down with the talented freshman, and he delivered some detail into his career and future.

Soinneah Monks: What were your high school averages?

What was it like playing for the Nike EYBL? How did it prepare you for the demands as a collegiate athlete?

“It was a lot different than playing for my high school team. There’s a lot more talent and competition and everyone is working hard to get recruited. It prepared me for this competitive level of basketball and I realized the expectations of a collegiate athlete early through the EYBL. It was a big adjustment, the referees aren’t as lenient with calls, the players are a lot more talented and every game has a new level of competition. I showed up to every game and every practice with the same mentality to work hard and push forward.”

When did you decide to devote your life to this game?

“It’s funny, actually, when I was born my dad brought a basketball to the hospital and put it in my hands and ever since I can remember, I’ve been playing the game and loving it.”

How have you been transitioning from high school life to life as an athlete in college?

“It’s a really big difference, especially since I moved far from home. My dad prepared me really well for college, though, and I’ve learned to look at school and basketball as my job, it’s what I’m here to do. Getting used to such a rigorous schedule has probably been the biggest adjustment. It’s not like high school either. Everyone is here to compete and play hard so adjusting to the speed of the game, learning how players move and how fast they are is something I’ve had to study. As far as being in college, I love that I can walk around and meet someone new every single day. It’s a change from being back home knowing everyone and I like that there’s such a variety of students on campus. It was difficult leaving home because my family is really close but I’ve always wanted to get out and become independent and learn about myself as a player and as a person.”

Why did you pick ECU instead of a higher-profile school?

“I knew if I went to a smaller school, I would get a lot more playing time, especially as a freshman. It’s basically wanting to be a large fish in a small pond. It’s all about performing well and getting better each day and I knew at ECU the program would allow me to do that. I wanted to move to a new conference to showcase my talent and really make a name for myself. ECU isn’t known as a basketball school but I think with the talent that we have, we could be able to change that and it’ll be interesting ot see all the new talent that comes through this program.”

How are you preparing yourself physically to succeed?

“I’m constantly working out and keeping myself in great shape and learning how to move fast and transition as a college athlete. It’s all about staying consistent, working hard, and becoming a better leader.”

What goals and aspirations do you have for yourself as a person?

“I want to study communications and work with people because I like giving back and helping others. Right now I’m just focusing on being a good student and the best athlete I can be.” 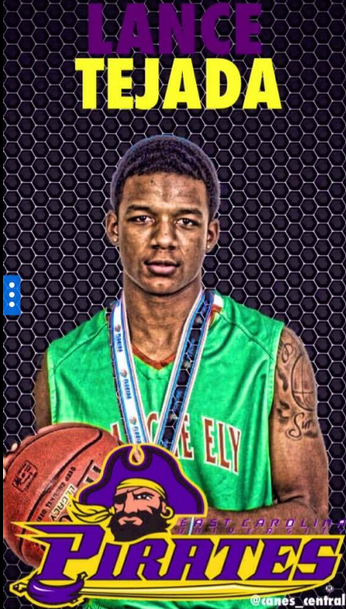