As he has all season, Duke's Jahlil Okafor delivers on his promise

The freshman made a guarantee to his teammates that helped the Blue Devils win a national title.

A link has been sent to your friend's email address.

A link has been posted to your Facebook feed.

As he has all season, Duke's Jahlil Okafor delivers on his promise

Nancy Armour of USA TODAY Sports looks at the key to the Blue Devils' win defeated Wisconsin and what it means for coach Mike Krzyzewski.

Duke Blue Devils center Jahlil Okafor (15) celebrates on the bench during the second half against the Wisconsin Badgersin the 2015 NCAA Men's Division I Championship game at Lucas Oil Stadium.(Photo: Jamie Rhodes-USA TODAY Sports)

INDIANAPOLIS — Jahlil Okafor calls Duke assistant coach Jon Scheyer "uncle," a fitting title given the fellow Chicagoan's age — the former Duke star is only 27, younger than the normal major-program assistant — and the close bonds developed during the star's freshman season.

It's also fitting, given this relationship, that it was Scheyer who sought out Okafor after the All-America selection picked up his fourth foul with just more nine minutes left in Monday night's championship game against Wisconsin.

Stay ready, Scheyer said. You're going to win the game for us.

For six minutes of game time, Okafor played cheerleader on Duke's bench, stymied by foul trouble, as his teammates fended off Wisconsin's attempts to build on a narrow lead. When he returned with little more than three minutes left, however, Okafor fulfilled Scheyer's prediction.

He also made a guarantee to his teammates: "I told them to have my back, to pick me up, and I'll be back," Okafor said. "And I'll finish it off."

"We never worried about Okafor, guard Matt Jones said. "Obviously he didn't play as well as he wanted to in the beginning of the game. But when we needed him the most he came through."

Duke was ahead by a single point, 59-58, when Okafor ended his six-minute absence. On the Blue Devils' ensuing possession, Okafor made an acrobatic layup over Wisconsin's Frank Kaminsky; he also drew a foul, though he failed to convert the free throw.

After a stop on defense, Okafor corralled Tyus Jones' missed shot and converted another layup, giving the Blue Devils an irreversible 63-58 lead with two minutes remaining. 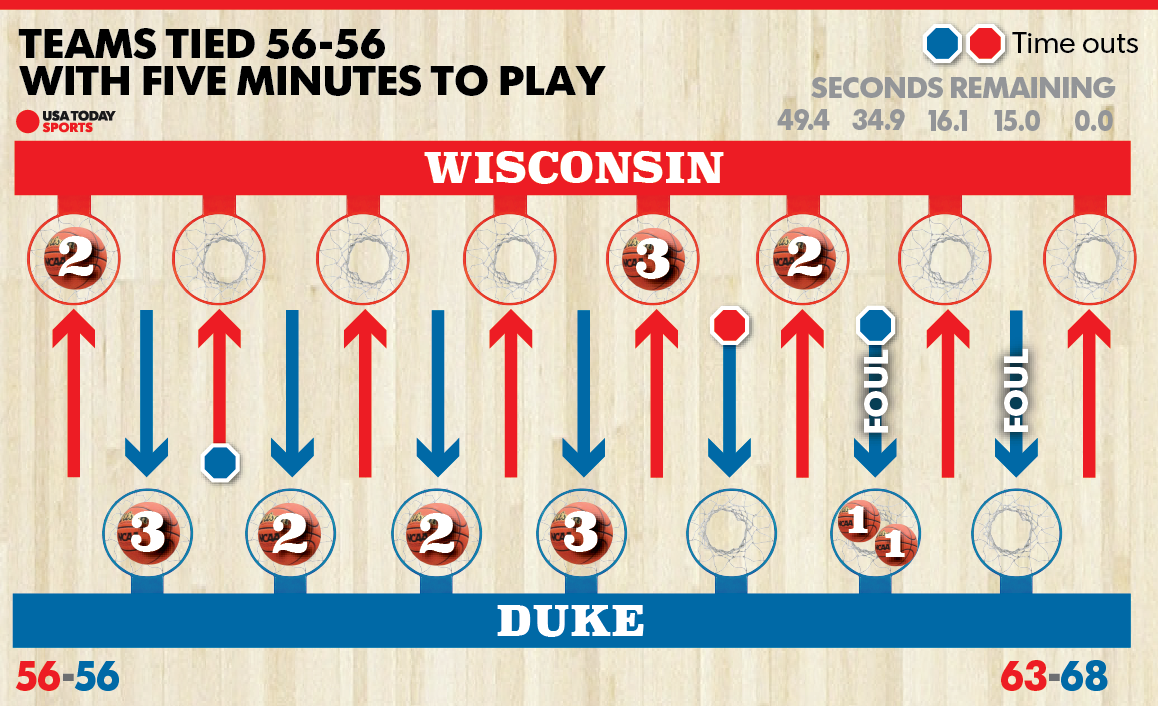 "Most players would be tentative or worried about foul trouble," Duke forward Marshall Plumlee said. "He was the Jahlil he's been all year. We love him for it. When we see him do something dominant like that it just fires us up. I get goosebumps just thinking about it. This is a night full of goosebumps."

Universally stunned by the Blue Devils' late charge to the national title, Wisconsin players could only view Okafor's six-minute span on the bench as a wasted opportunity.

This was when the game was supposed to turn in its favor: Wisconsin had not just an advantage in the paint — where Kaminsky seemingly held a mismatch against Duke backup Amile Jefferson — but in confidence; losing Okafor robbed Duke of its star, its linchpin, and the Badgers could have only smelled blood.

The rest of the Blue Devils' freshman class stepped up in Okafor's stead. Guard Tyus Jones, also a Chicago native, scored a game-high 23 points and earned tournament most outstanding player honors. Backup guard Grayson Allen, perhaps the Final Four's breakout star, added 16 points on 5-of-9 shooting and was named to the all-tournament team. In total, and counting Okafor's 10 points, freshmen scored 60 of the Blue Devils' 68 points. They accounted for every point Duke scored in the second half.

"He's one of the top players in the country, so having him on the bench was definitely to our benefit," Wisconsin guard Josh Gasser said of Okafor. "But it was tough. We didn't capitalize on some situations where we could have taken over down the stretch. Things didn't go our way."

The Blue Devils' six-minute span without Okafor tells two stories: one of Duke's season, where eight scholarship players banded together and won the national title despite less than ideal depth; and another about Okafor himself, the potential No. 1 pick in this year's NBA draft, and his ability to remain poised throughout the frustration.

"Everybody trusts each other," senior Sean Kelly said. "(Okafor) trusted that everybody would have his back. Everyone trusted that he would have their back. And he had two big buckets in that stretch when he was in. That's a testament to who he is as a player."

It's a bigger testament to who Okafor is as a person, Okafor's father, Chucky, said.

"When it comes to basketball, it has never been about him," he said. "It has always been about winning. So he wouldn't have cared if he hadn't played another minute. If they had won the game he'd still be celebrating with his team.

"I knew he was going to get out there and do his thing when he had the chance. I just wanted him to keep his head in the game, and he did. He did a great job supporting his teammates. Getting in foul trouble didn't stop him from helping his team in any way possible."

It's a perfect ending, Okafor's father said — and not just for Okafor, but for the freshmen, from Allen, Jones and Okafor through Justise Winslow, who enrolled together with a singular purpose: to win the national championship.

"People don't understand that these boys, all of them, they only had one goal the entire year," he said. "That goal was to get to this moment and win the national championship. As a parent, I can't even express how proud I am. Because they set goals and they accomplished them."

The next decision, a tough one, might be made easier by the national title. There's little left for the freshman to achieve: Okafor has been an All-America pick, has built a legacy, even in just a single season, and has won a national championship.

The entire family — father and son — remain noncommittal on Okafor's NBA future, saying instead they'd come together and discuss the pros and cons behind the decision in advance of the April 26 cut-off date to declare for the draft.

"I love (coach Mike Krzyzewski), I haven't even thought about (returning for his sophomore season) yet," Okafor said. "I just can't wait to celebrate."

Chucky Okafor chose his words carefully: "It's a great way to finish up a first year at college."

A link has been posted to your Facebook feed.

Okafor dunks the ball during the first half against Wisconsin in the NCAA championship game. Pool photo, USA TODAY Sports
Fullscreen

Duke Blue Devils center Jahlil Okafor (15) misses a reverse dunk during the second half against the Robert Morris Colonials in the second round of the 2015 NCAA tournament at Time Warner Cable Arena. Bob Donnan, USA TODAY Sports
Fullscreen

Jahlil Okafor of the Duke Blue Devils celebrates with fans after a win against the Clemson Tigers at Cameron Indoor Stadium. Grant Halverson, Getty Images
Fullscreen

Jahlil Okafor of the Duke Blue Devils battles Joel James of the North Carolina Tar Heels for a rebound during their game at Cameron Indoor Stadium on February 18. Grant Halverson, Getty Images
Fullscreen

Duke Blue Devils center Jahlil Okafor reacts after scoring a dunk against the Connecticut Huskies during the second half at the Izod Center. Jim O'Connor, USA TODAY Sports
Fullscreen

Interested in this topic? You may also want to view these photo galleries: