Back to Men's Basketball coverage

Thon Maker, a 7-foot, 210-pound senior center from Orangeville Prep High in Mono, Ontario, attended Friday’s Kansas-Northern Colorado basketball game with other members of his high school team who are competing in an event in Wichita. 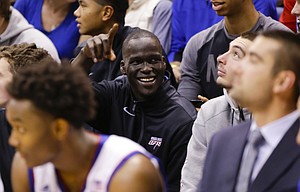 Kansas recruit Thon Maker salutes the Kansas student section as they chant his name during the second half, Friday, Nov. 13, 2015 at Allen Fieldhouse.

He said he will likely play for a college one season rather than going overseas to play pro ball in 2016-17 leading up to the NBA Draft.

“Most likely,” Maker told ESPNU as reported by Zagsblog.com. “I am not thinking about pro in terms of going overseas and that, but I’m thinking about college.”

Also, Blake Harris, a 6-2 junior point guard from Word of God Christian Academy in Raleigh, North Carolina, attended the game. Harris, who is ranked No. 97 in the Class of 2017 by Rivals.com, is being recruited by KU, Cincinnati, Clemson, Florida State, Georgetown, Georgia Tech, Indiana, Miami of Florida, N.C. State, Vanderbilt, Wake Forest, Wisconsin and others.

— See what people were saying about the game during KUsports.com’s live coverage.

More news and notes from Kansas vs. Northern Colorado 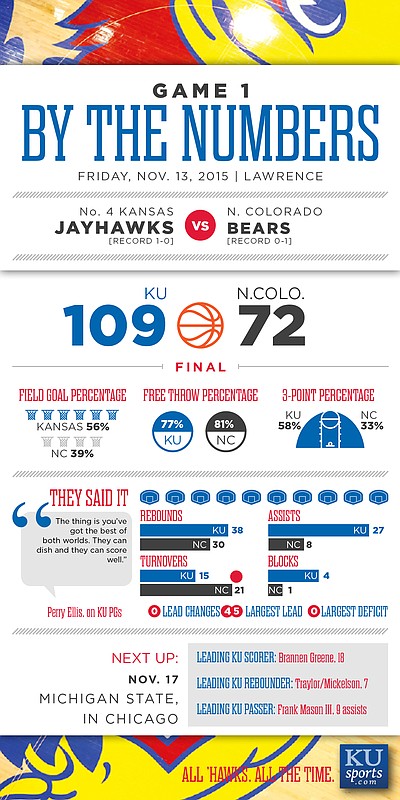 By the Numbers: Kansas 109, Northern Colorado 72

Really want this kid to play for Kansas. One year under Coach Self and he could be a #1 draft pick.

If he is eligible..

He's much more attractive now to Kansas since he is going to play for a full year. Id like to see him become a Jayhawk. One, because I think Kansas would be good for him. Two, because he'd bring continue the reputation for Kansas: Big Man U. And three, let's face it: if you gain a reputation among a certain demographic, you have more credibility with them than other schools. African-born players will feel a sense of ease in coming to Kansas if Embiid, Diallo, and then Maker all attend.

Don't forget Coleby - I know he is from Haiti - but you are absolutely right in that establishing a reputation as a welcoming University for foreign born players will go a long way in helping us recruit these players. Even Svi helps in establishing that.

Coleby is from the Bahamas.

Thanks guys..now I remember the passport issue..

Thon is also more attractive next year when we lose a ton of bigs vs. this year when we have an excess - to some extent even without Diallo. If Diallo doesn't gain eligibility this year, he could declare for the draft or he could also choose to pull a McLemore and come back for a dominant year with a full year of instruction under his belt. Could be a hugely dominant frontline is Thon were to join him along with Carlton & Dwight. Wow! Though we might be less attractive with that much company on the frontline. Really shouldn't be a deterrent to someone of Thon's ability.

He will get his one year - at Arizona State.

We don't want this kid. with that shady "guardian" of his he has Recruiting violation written all over him. We'll be playing another waiting game like we are with Diallo.

For the record, Arizona State lost their season opener last night, on their home court, to Sacramento State. If that's where he wants to go to school, then so be it. My guess is that he will go to a higher profile school, since he is already a declared one and done. None of the big time programs, KU included, shy away from the one and dones. However, the potential recruiting violation issues could be a detriment. Lot of potential trouble for perhaps minimal benefit.

Remember Andrew Wiggins. He was a declared one and done, and although he had a nice year at KU and certainly had no potential recruiting violation issues, the effect on KU's performance for the season was less than spectacular. Perhaps if Joel Embiid had not gotten hurt, it would have been different. However, sometimes it appears the one and done player loses some enthusiasm as the year progresses, and he begins thinking more about the pros. Certainly, Andrew was basically a "no show" in the NCAA game against Stanford.

Nevertheless, whatever approach Coach Self and the staff want to pursue is just fine with me. Can't argue with their track record of conference championships.

I ll take any player that is, A) Eligible and B) can make a shot in the NCAA Tourney.

Commenting has been disabled for this item.