You are the owner of this article.
Edit Article Add New Article

Democratic contenders debate in South Carolina, days before their primary 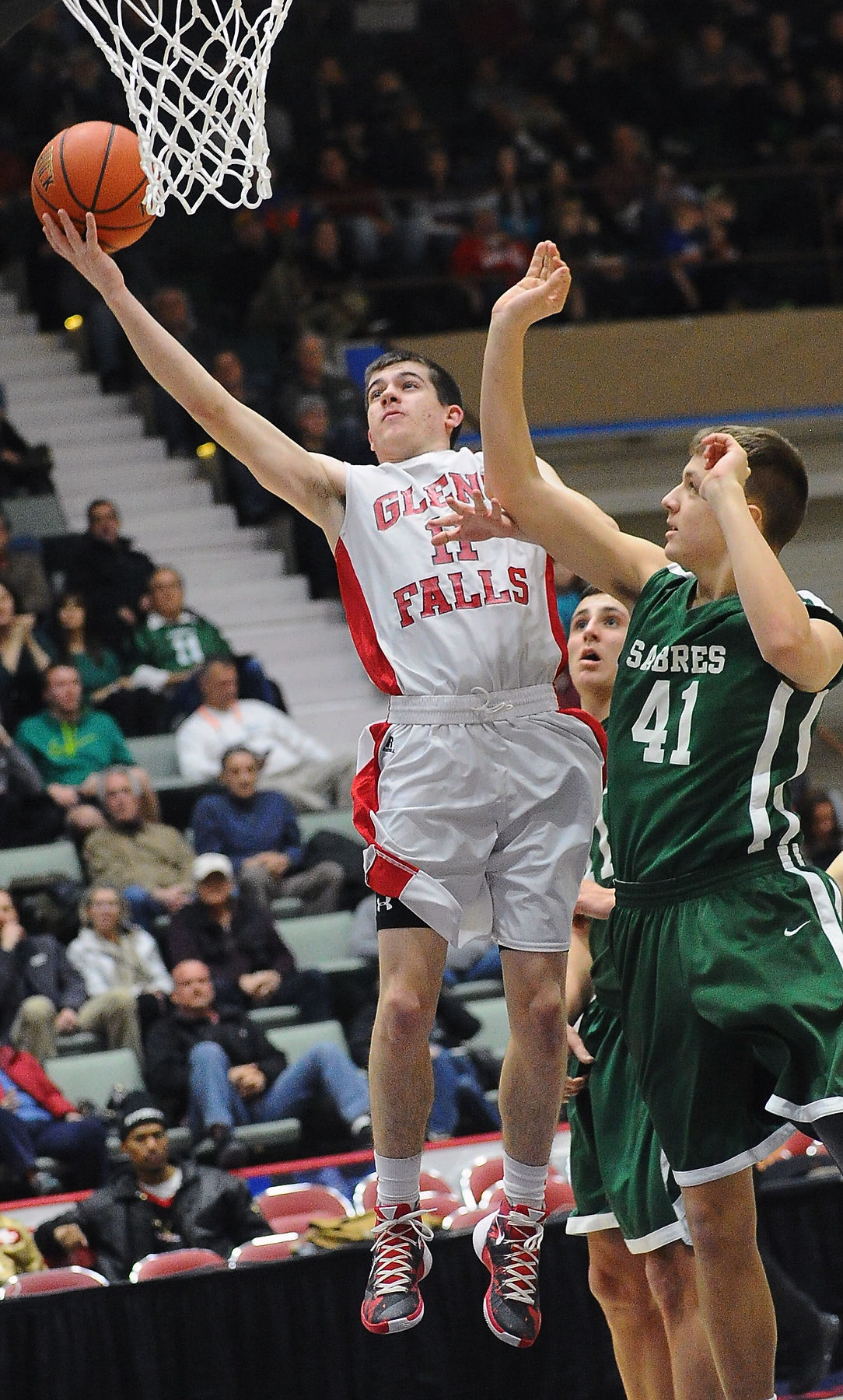 Glens Falls’ Joseph Girard III drives past Schalmont’s Jesse O’Dell during their game in the Section II Boys Basketball at the Civic Center on Monday night. Glens Falls was a 69-55 winner. 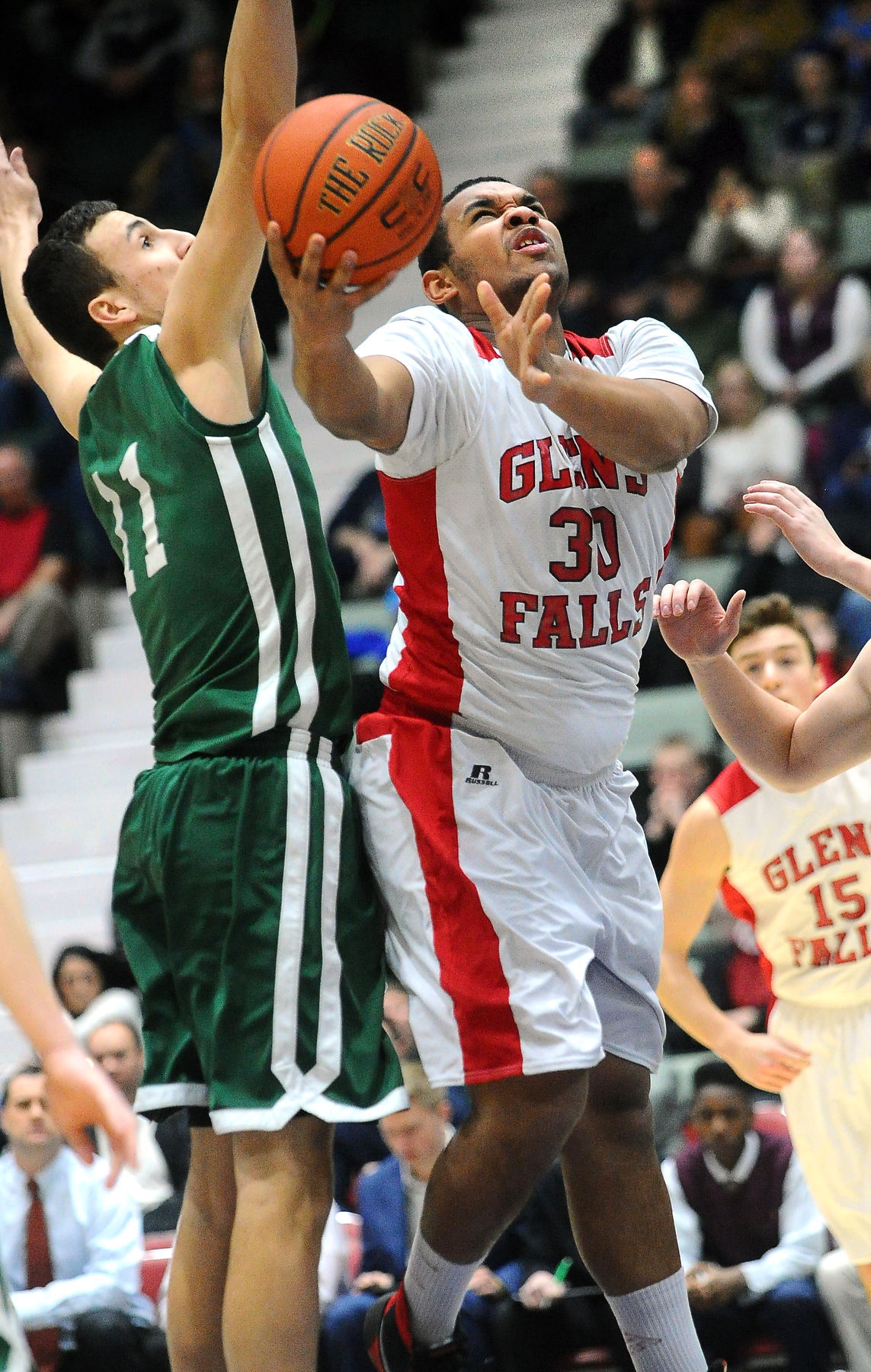 Glens Falls’ Marcus Owens, right, takes a shot against Schalmont’s Zac O’Dell during their game at the Civic Center on Monday night.

GLENS FALLS  Joe Girard Sr., the longtime St. Mary’s coach and athletic director who died Friday, was many things to many people. It’s what he wasn’t — a quitter — that inspired his grandson on Monday night.

Joseph Girard III overcame a 0-for-8 first-quarter shooting performance to score a game-high 37 points and lead second-seeded Glens Falls to a 69-55 win over Schalmont in the Class B semifinals at the Civic Center.

The Indians (20-3) will play Hudson in the final of the Section II Boys Basketball Tournament at 6:30 p.m. Friday at the Civic Center.

Girard, who averaged 33.5 points per game entering Monday, was scoreless in the first quarter and had nine points at halftime. He took over in the second half, however, at one point hitting three consecutive 3-pointers in the fourth quarter.

“I know my grandfather was right there with me, he just had a different seat tonight,” Joseph Girard III said. “He wasn’t here with me, but he was with me in spirit.

“I was doing it for my grandfather tonight, obviously,” he added. “I knew I couldn’t quit for him because he wasn’t a quitter. He’s survived things that people don’t know how to survive. I was just doing my best to be like him and not quit.”

If the first quarter didn’t make Glens Falls feel like quitting, nothing ever will. The Indians were 1 of 15 from the field, but sixth-seeded Schalmont wasn’t much better and was also sloppier with the ball. Glens Falls didn’t score its first points until 59 seconds remained in the quarter, but escaped the quarter tied 6-6.

“I look at the scoreboard, 6-nothing with two minutes left,” Glens Falls coach Rob Girard recalled. “Even if it’s six-nothing (at the end of the quarter) we’ve got a shot. Joe wasn’t shooting well, we knew that was going to change. He hung in there. Had to talk him into it sometimes, but he hung in there. Boy, that second half he put on a show.”

Schalmont and Glens Falls were tied at 24 at halftime. It remained close until Girard was fouled on a 3-point attempt just before the third quarter ended. He made two of the three foul shots to give the Indians a 46-43 lead.

The call angered Schalmont coach Greg Loiacano, who said he felt Girard stuck his leg out in shooting it, and had discussed the scenario with the referees before the game.

“They said it would be an offensive foul … but they called it on us. That gave them a nice little lead,” Loiacano said.

Still, Loiacano wasn’t pinning everything on that call, as his Sabres missed their share of close shots, and also went 8 of 18 from the foul line.

“That won’t keep you in the game for long,” he said.

Schalmont led 50-48 before Joseph Girard hit his three consecutive 3-pointers to give the Indians a 57-51 lead with 4:08 left.

“When it comes down to the end, it’s game time,” Joseph Girard said. “I like to hit the big shots, so I was going out there and I was trying to do that, and tonight they went in and helped us win the game.”

The main player Glens Falls had to deal with was 6-foot-6 Zac O’Dell, who did his damage (23 points, 19 rebounds), but also was neutralized at times by Glens Falls’ rotation of big men: Andrew Stamatel, Greyson Brady, Marcus Owens and Connor Schliff. Owens and Schliff marked O’Dell and also grabbed 19 rebounds between them.

“Marcus Owens, he kept us in that game,” Rob Girard said. “It wasn’t just points … but rebound after rebound and loose balls. Good stuff from him. Connor didn’t even play against Stillwater. They thought he had appendicitis, comes back yesterday, wasn’t feeling great. He did a great job on O’Dell.”

And now Glens Falls returns for its first sectional final since losing to Scotia in the 2013 Class A final.

“It’s been tough,” Rob Girard said of the last few days. “Of course (Joseph) lost his grandfather. He was my high school coach, my uncle, just a great man. But they’ve been great, all those kids, they’ve been there for him. … It gets no better than that. That was for him.”

You have free articles remaining.

Be the first to know

We'll send breaking news and news alerts to you as as they happen!

Glens Falls’ Joseph Girard III drives past Schalmont’s Jesse O’Dell during their game in the Section II Boys Basketball at the Civic Center on Monday night. Glens Falls was a 69-55 winner.

Glens Falls’ Marcus Owens, right, takes a shot against Schalmont’s Zac O’Dell during their game at the Civic Center on Monday night.