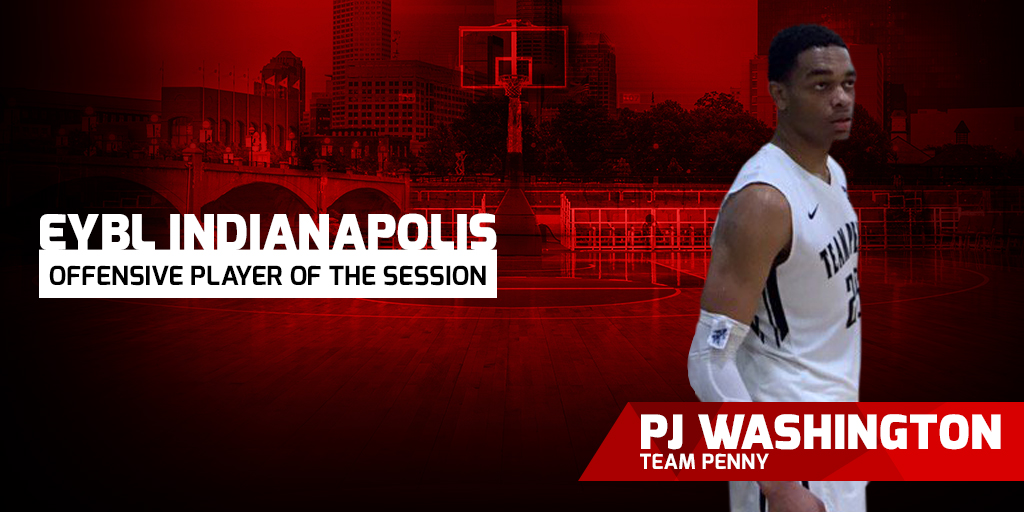 PJ Washington is enduring his third year of EYBL rigors, and he’s clearly not letting the grind get him down. Instead he’s thriving, clearly saving his best performances for his last go-round.

With the EYBL season at its midpoint, Team Penny can feel comfortable with their position in Division B thanks to Washington.

The 6-foot-8 point forward has improved his play and now has ability to completely take over a game.

Team Penny's superstar was in prime form in Indianapolis, and his offensive efficiency was through the roof. The junior averaged 22.3 points while shooting 37-for-54 (65.8 percent) from the field. His best outing was a 30-point, 15-rebound performance versus Phoenix Phamily and their stars Marvin Bagley and Cody Riley.

Washington's emergence is no surprise to his high school head coach, who watched as the junior put up major numbers this past season at Findlay Prep.

"PJ can score at all three levels," Johnson said. "He's got a great skill set, size and versatility."

Washington has everything going for him physically, but it's his blue-collar mindset that puts him over the top as a dominant player.

"He's a tremendous young man," Johnson said. "And is one of the hardest workers we have had at Findlay."

Johnson's assessment says a lot, considering the number of talented and successful individuals who have come through the Pilots' program.

If Indianapolis is any indication, Washington is on his way to setting the new standard of success for both programs.