Major-conference tournament play - also known as The Week in Which Marquette Gets Yet Another Chance to Give the Big East Conference 11 Teams in the NCAA Tournament - starts Tuesday. So, while Butler, Princeton, Harvard, Utah State and Virginia Commonwealth try to slug out, or sweat out, NCAA bids, a handful of others will be trying to add one last quality win and being thankful that the former field of 65 is a field of 68. 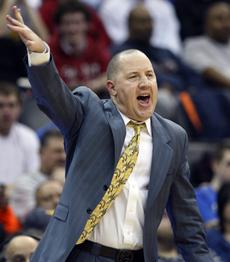 Marquette (18-13): Plays Providence on Tuesday, then would face West Virginia, followed by Louisville.

Baylor (18-12): Oklahoma on Wednesday, then would face Texas.

Colorado (19-12): Iowa State on Wednesday, then would face Kansas State.

Michigan State (17-13): Iowa on Thursday, then would face Purdue.

Southern California (18-13): California on Thursday, then could face Arizona.

Washington State (19-11): Washington on Thursday, then could face UCLA.

Richmond (24-7): Rhode Island or Saint Louis on Friday, then could face Temple.

Alabama (20-10): Auburn or Georgia on Friday, then could face Kentucky.

Clemson (20-10): Boston College or Wake Forest on Friday, then would face North Carolina.

In another indicator of what this season has been like, Marquette, Michigan State and/or Southern California can tie the NCAA record for most losses for an at-large entrant since the field went to 64 in 1985.

PREVIOUS
Ohio State's Jon Diebler on record-setting 3-point tear
NEXT
What to watch: Conference top seeds headed to NIT
To report corrections and clarifications, contact Standards Editor Brent Jones. For publication consideration in the newspaper, send comments to letters@usatoday.com. Include name, phone number, city and state for verification. To view our corrections, go to corrections.usatoday.com.

Erick Smith has managed USA TODAY's online college football coverage and picked games on the web for the last 11 years. He's been a fan of the sport going back to the days when the Big 12 and the BCS didn't exist and all the New Year's Day games were actually played on New Year's Day. More about Erick.

Nicole Auerbach joined USA TODAY in the fall of 2011 to oversee online college basketball coverage. She's a New Jersey native and a big fan of Big Ten football and basketball. She firmly believes Madness need not be limited to just March. More about Nicole.