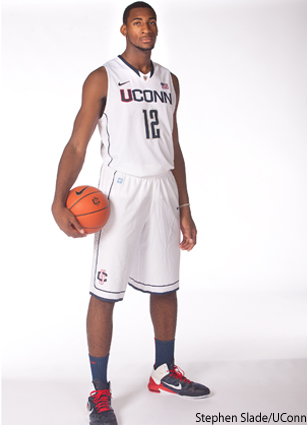 It’s not like we haven’t tried to get in touch with Andre Drummond. We’ve been trying for a while now. Trying our best.

We started trying last spring, back when Drummond was still in prep school at Connecticut’s St. Thomas More School. We spoke to his coach, Jere Quinn, a guy who’s used to dealing with big-time players and national media. This was a few months before anyone knew that  Drummond would spend the ’11-12 season playing college basketball. Like we do whenever we’re trying to get in touch with a top high school player, we asked his coach to help us talk to Drummond; Quinn told us Drummond was a “great kid” and a “good story,” but added that his mother, Christine, had been limiting press access.

We never did talk to Andre.

We’re not mad at his mom for trying to regulate the non-stop interview requests. And we understood last fall—after Drummond had blown the minds of prep basketball watchers and college hoop fans alike by reclassifying to 2011 and committing to a UConn squad that a) had just won the NCAA Championship, and b) didn’t actually have a scholarship to spare—why folks in Storrs might want to ease into letting Drummond tell his story. What we didn’t expect, after six weeks of trying, was that we’d never even get Andre Drummond on the phone.

Like I said, we tried. We weren’t the only ones who couldn’t get Drummond on the line, and we didn’t take it personally. We figured we’d see—and hear—plenty from the 18-year-old once he took the court for the Huskies. After all, this is the long, athletic, physically gifted big man who many have penciled in as the No. 1 pick in this coming year’s NBA Draft. Once this kid was on the floor, how would we be able to ignore the noise?

As this piece gets written, it’s mid-December, and the University of Connecticut is nine games into its NCAA title defense. The Huskies stand 8-1, and sophomore wing Jeremy Lamb is running things with 20 points per game. Freshman guard Ryan Boatright, who was ineligible for the season’s first six contests, has been terrific in his first three games in the lineup. Shabazz Napier, another sophomore, is averaging 16 points and better than 6 assists per.

But you have to dig a little to find Drummond on the stat sheet.

He’s there, a starter in five of nine games, averaging 23 minutes per. Given those minutes, his 6 rebounds per game are solid, and his nearly 3 blocks per game are undeniably impressive. But then there’s the free-throw numbers (10-30) that have Shaq saying, “C’mon son,” and his points per game—7.8—that, while not embarrassing, hardly hint at a guy expected to save some hard-luck NBA franchise this June. The question these numbers raise: Where’s the noise, Dre?

It’s coming. That’s all we can assume from long-time SLAM subscriber Jim Calhoun (trust us), who had nothing but praise for Drummond after the Huskies’ 67-53 win over a ranked (!)  Harvard squad on December 8. “Andre is going to get better every game,” Calhoun told reporters after Drummond went for 12 points on 6-7 shooting against the Crimson. “He’s a very naturally gifted athlete. We want him to be a naturally gifted athlete who is a terrific basketball player. That’s what he’s going to be eventually.”

That the 6-10, 270-pound Drummond earned such praise from his Hall of Fame coach after a modest night against an Ivy League defense tells us a few things. It tells us Drummond is not going to have the sort of dominant freshman year we’ve grown accustomed to from likely one-and-done college stars in recent years; it tells us Drummond may not be one of those one-and-done dudes in the first place. It tells us, as well, that Calhoun believes he’s got a star on his hands, regardless of whether the early numbers make that obvious to the rest of us.

We’re bummed that we weren’t able to ask Drummond about his progress, or about his late, unexpected decision to join UConn this season, or about the scholarship shuffle that opened a spot for him (redshirt freshman Michael Bradley reportedly gave up his scholarship for  Drummond, applying for financial aid instead). But we’re not mad. If anything, we’re excited to watch this guy progress.

After that Harvard game, Drummond told reporters that his ultimate goal was “playing consistent every single day.” That may sound modest to the rest of us, especially given his all-world potential. But as he’s made clear, Andre Drummond isn’t interested in telling the world what it wants to hear, or when it hopes to hear it. He,  and his game, will talk when they see fit.

Andre Drummond: ‘No Friends or Loyalty’ in the NBA

ONE OF ONE: Paige Bueckers Covers SLAM 226 ⚡️