GLENDALE, Ariz – This was the “year of the freshman,” the season where names like Lonzo Ball, Jayson Tatum and Josh Jackson were supposed to lead their teams to the sport’s biggest stage.

Gonzaga added another name to that list in its 77-73 national semifinal victory over South Carolina on Saturday. He is Zach Collins, a 7-foot-0, first-year player from Las Vegas who tallied 14 points, grabbed 13 rebounds and six blocks in the national semifinal.

The best part? He called his shot before the game.

“Well, me and Zach are roommates,” Gonzaga guard Nigel-Williams Goss said. “And we’ve been roommates all year long. And he told me before the game, he said, ‘Look, I wouldn’t want to be playing against me today.’ ”

“I really did say that,” Collin said. “And Nigel said the same thing back to me. But I don’t know, I just felt like we did our homework. And the scout was really good. And we’ve been guarding them, their plays really well all week.”

Collins’ swagger comes from a place of confidence. He isn’t the latest diamond-in-the-rough, out-of-nowhere star to emerge in Gonzaga’s system. It’s quite the opposite actually, as he has credentials unlike any freshman the school has had. He is arguably the highest-ranked recruit to commit to Gonzaga and the only McDonald’s All-American the Bulldogs have signed straight out of high school. Most NBA draft boards have him as a projected first-round pick if he decides to go pro after this season.

So yeah, he’s good. And his story is more remarkable when you dig deeper. Collins was actually expecting to start when he committed to Gonzaga, but an injury last season forced Przemek Karnowski (who should have graduated last year) to miss all of the 2015-2016 season.

With Karnowski back, it pushed Collins to the bench. Gonzaga coach Mark Few said the freshman hasn’t seemed to mind.

“The best thing about Zach, he’s as great a kid as you’re ever going to coach,” Few said. “And he’s an unbelievable team guy and that’s all he cares about.”

“He loves being part of this team. He loves what he’s doing on this team. He’s, from the day one, he came in, we recruited him as a starter and then Przemy’s deal happened, so it’s crazy. He’s had a great attitude about that. I consider him a starter.”

Though Collins came off the bench against the Gamecocks, he played starter’s minutes, emerging as the star that Gonzaga fans already knew he was. Collins made almost every key play down the stretch to help Gonzaga seal the win. In the final eight minutes alone, he had five rebounds and three blocks – including a crucial one with 1:21 to go.

Oh, and he hit a 3-pointer with 6:45 left to put Gonzaga up, 68-67, which ended a 16-0 South Carolina run and gave the ‘Zags a lead they’d never relinquish. Collins was hesitant to give himself too much credit for the crucial bucket.

“I knew they were heating up Nigel,” Collins said. “And I just wanted to come in and hit a shot. Right when I flashed up to the high post I knew I was going to shoot it. I think Przem was open on the low post. I probably should have passed it but luckily it went in.”

But he didn’t pass it, and it seems like all of ‘Zags Nation is happy with that decision. 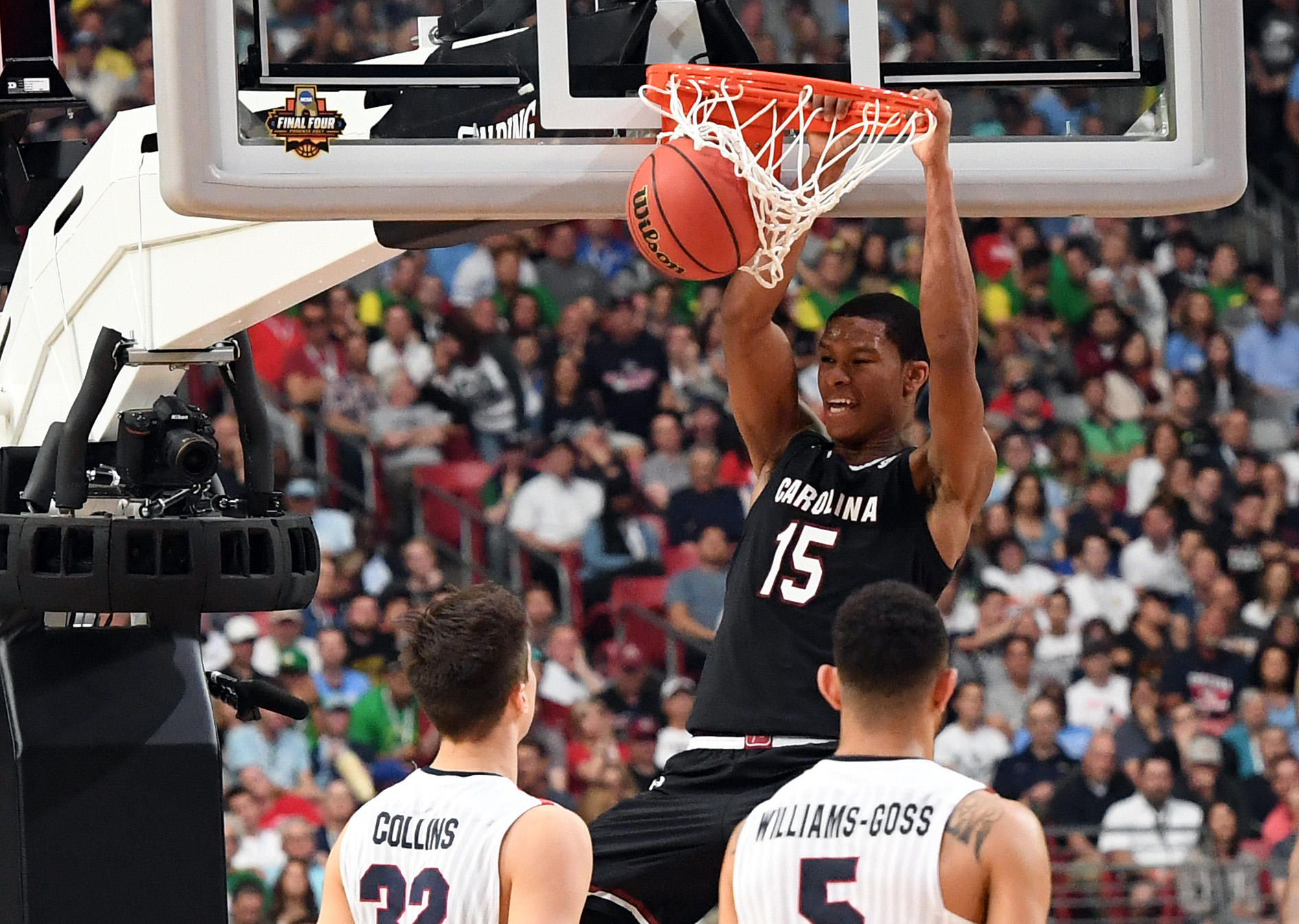 ™ and © 2020 Fox Media LLC and Fox Sports Interactive Media, LLC. All rights reserved
Use of this website (including any and all parts and components) constitutes your acceptance of these TERMS OF USE and UPDATED PRIVACY POLICY.
Do Not Sell my Personal Info