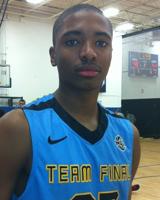 On June 25th, Mikal Bridges gave a verbal commitment to Jay Wright and the Villanova Wildcats. His decision marked the end to a rapid rise for Bridges, who was relatively under the radar before the EYBL season started. I recently had the chance to sit down with Mikal to discuss the rigors of the EYBL, his time on Team Final and what he looks to improve on heading into his senior year.

Q. What is it like following in the footsteps of the talent on Team Final?

A. It’s an honor. It’s an honor, playing after people playing in the NBA, that are good right now. It’s good to play behind them.

Q. Biggest adjustment from high school to the EYBL?

Q. How is winning in the EYBL different than high school?

A. You just gotta play as a team. Get wins. Just like how we went 4-1 this weekend. We played as a team and we won.

Q. Strongest aspect of your game?

A. Finishing at the rim. Shooting is coming along. That’s my two strongest for sure.

Q. Moving into your senior year, what do you want to improve on?

Q. Toughest player to guard on the circuit so far?

Q. Compare yourself to any current or former NBA player?

A. I think Kevin Durant. That’s my favorite player and I base my game off him. I like how he plays.