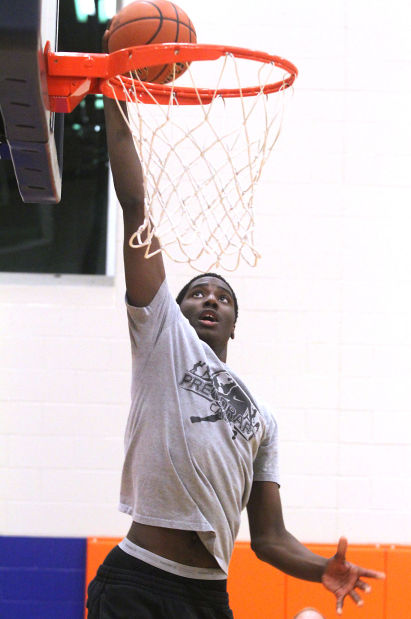 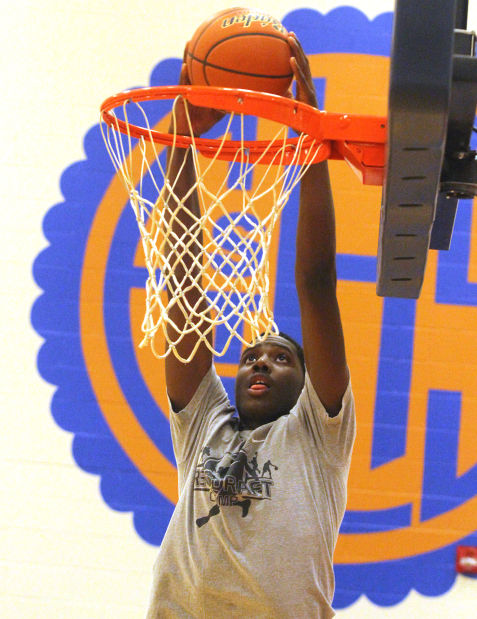 Throughout the majority of his young life, Jeremiah Tilmon had no interest in basketball.

"Never liked it," he recalled. "Thought it was stupid."

Tilmon, a 6-foot-10 freshman at East St. Louis High, has changed his mind in a hurry.

Despite only playing the game for the better part of three years, the 15-year-old has developed into one of the top high school freshman in the country.

His recent outstanding performances at elite spring and summer camps, as well as his eye-popping play for the MoKan Elite 14-and-under AAU team, has put a microscope on a young man who remembers laughing at his classmates who played basketball back in the fifth grade.

"It was something I just didn't think would be fun," Tilmon recalled. "So I didn't want to do it."

Tilmon's first love was wrestling. Were it not for his elementary and junior high wrestling coach, Willie Harris, Tilmon likely never would have stepped on the hardwood.

Through some major arm-twisting, Harris forced the gangly 12-year-old to give basketball a chance.

"He told me that I better try it if wanted to keep wrestling," Tilmon said.

It was love at first sight.

A hulking 6-5 as a sixth grader, Tilmon was a natural. After a year of learning the fundamentals, he averaged almost 20 points per game in the seventh grade. In eighth grade, he began to dominate his smaller opponents.

Then, last summer, he turned heads by leading his AAU squad to the championship of the talent-rich Chicago Summer Classic.

Tilmon drew national attention at the prestigious CrossRoads Elite Camp in Nashville in August as he schooled some of the best freshmen and sophomores in the country with a host of major college coaches looking on.

Now, the sky is the limit.

"I don't think I've ever seen someone so skilled for his age," East St. Louis coach Tony Young said. "He's got high-major (college) talent. If he develops like he should be able to, there will be no stopping him."

But it is easy to see that he believes Tilmon can reach the level of other East St. Louis High greats such as LaPhonso Ellis, Darius Miles and Cuonzo Martin.

Others around the country agree.

Although ranking freshmen who have yet to play a week of high school basketball is risky, Eric Bossi, National Recruiting Analyst for the highly-respected website Rivals.com, was impressed with what he saw in Tilmon during his displays at camp.

"He is clearly a high-level player with unlimited potential," Bossi said. "Normally guys that big are clumsy. He's got the kind of talent that kids at that age don't usually have."

The 205-pound Tilmon already has heard from over 100 NCAA Division One schools including most of the teams currently ranked in the Top Ten.

Young, with his NCAA experience, is hoping to further develop Tilmon's raw skills.

"What we want to do is keep him focused on school and keep him learning some of the finer points of the game," Young said.

Tilmon, who is still growing and could top out as high as 7-1, was a terror in preseason practice. He drew immediate respect from his teammates for his shy, quiet demeanor in addition to his desire to learn.

Senior guard Justin Smith is one of several Flyers that have taken Tilmon under his wing.

"We get on him when we need to and tell him what to do and how it has to be done — and he does it," Smith said.

Smith and his teammates, like Young, do not hide their expectations for Tilmon.

Tilmon is surprisingly fast. He runs the mile in 5 minutes 35 seconds. He gets up and down the court with surprising agility and has a seven-foot plus wingspan.

The Flyers carry legitimate state title hopes into the season, thanks to Tilmon and a strong returning core.

Seniors Smith and Darrion Beane and junior Terry Beckner are back from a team that won 21 of 29 games in 2012-13.

But this year's squad is deep and should improve steadily as the season goes along.

Smith, 5-7, will run the show from the point guard slot. Beckner, a 6-5, 260-pound football standout, will play the bruiser role inside. Beane averaged 7.9 points last season.

And we're going to show it."

The Flyers host Alton in their Southwest Conference opener on Friday.

Across the basketball landscape, there are familiar faces in new places as several key players transferred to new programs this winter.