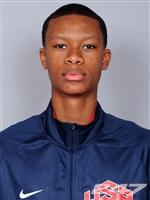 By JACK LeGWIN Special to ZAGSBLOG COLUMBIA, S.C.- P.J. Dozier is upbeat after surgery. In fact, he feels better than he did before he had ACL-repair surgery that is keeping him out for the whole year. “Rehab is going really good right now,” Dozier told SNY.tv. “My goals are to come back bigger and stronger than I did before. I really want to enhance my game so you can see the difference.” Ranked 17th in the Class of 2015 by ESPN, Dozier is a 6-foot-6 point guard out of Spring Valley (S.C.), and currently holds offers from North Carolina, Kansas, Alabama, Clemson, Georgetown, Georgia, Indiana, Louisville, Mississippi State, Ole’Miss, Missouri, Ohio State, South Carolina, Southern California and Virginia Tech. “Definitely, everyone is still on me,” Dozier said. “They’re on me the same as they were before I had the surgery. I’m out for the season, and its hard being on the bench, but I have to be a leader. I probably won’t be cleared until the summer most likely, but its possible that I could be cleared by March.” When asked if he had any favorites, or if anyone was in touch more than anyone else, he says no. “I don’t really have any favorites right now,” Dozier said. “No one has really been calling me more than anyone else either, because I haven’t been playing.” At the moment, Dozier is just focusing on being ready by then, doing whatever it takes to play at a high level again. “I’m just stregthening it right now,” Dozier said. “I’m trying to get the muscle back, as well as the range of motion.” Follow Jack on Twitter

26 NBA Personnel Expected at Louisville-Kentucky; Backcourt Matchup Will Be Key for Scouts