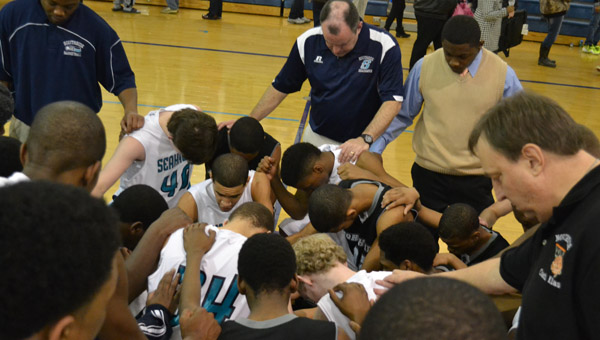 Conference and county rivals Northside and Southside are living evidence that there can, in fact, be camaraderie amongst rivalry. Despite a four-point second half deficit, the Panthers defeated the Seahawks on Thursday night, 73-63, sweeping the season series.

Northside big man Edrice “Bam” Adebayo established his presence in the first 10 seconds of the game, throwing down a demonstrative alley-oop slam assisted by point guard Jaquan Sessoms. Defensively, Adebayo was the key to Panthers success, using his imposing 6-foot-10 frame to his advantage and pulling down rebounds at ease. After reaching the three-foul mark just minutes into the second quarter, he was benched, opening the door for Southside’s standout point guard Donshae Miller to utilize his natural athletic ability and take on the Northside defenders.

Miller, along with his counterpart, Aaron Jones, scored hard-earned points in the paint and kept their team in the game.

“I think my guys played pretty good,” said Southside Head Coach Sean White. “It seems like every time this two teams get together they step it up. It’s going to be a close game no matter who is the better team. I think compared to the last time we played them, our shots weren’t going in the second half like they were in the first.”

The second half was all Northside. Proctor’s defense had one goal: to shut down Miller and force the Seahawks to rely on other scoring options.

“I’m not saying we stopped Donshae because you can’t stop him, but we slowed him down,” said Proctor. “He’s a heck of a player. Offensively, we did what we wanted to better. We hit a few shots and that made all the difference in the world.”

Adebayo, Sessoms and Antonio Woods began to capitalize on open looks and widen the point margin. Adebayo finished with a game-high 32 points, while Miller ended with a team-high 18.

Even with the matchup being labeled as a rivalry, the two teams embraced each other at center court after the final whistle, a testament to the respect both these teams have for one another.

“I’ve known Mike for a long time even when I was coaching JV here and he was still coaching varsity over there,” said White. “I have a lot of respect for him. I consider him a friend. When they’re the county rivals like we are, you see the heat going on because it’s such a competitive game. The sportsmanship, unlike what you saw the other night (at Northside), is still there between these two teams.”

Northside will cap off their regular season campaign on the road against Pamlico County on Friday, while Southside finishes their season at home tonight as well against East Carteret. Both stories will be available in Sunday’s section.