St. John’s Jordan Questionable for Xavier after Death in Family 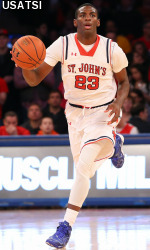 St. John’s freshman guard Rysheed Jordan is questionable for Tuesday’s game against Xavier after suffering the death of a “close relative,” the school announced Monday. Johnnies head coach Steve Lavin said he and Jordan will meet and assess the “right thing to do” in terms of Jordan’s participation for Xavier. “He’s in Philadelphia today with his family for the viewing and will return to New York [Monday night]” Lavin said. “I’ll get together with Rysheed and approach the situation in an appropriate manner based on how he is navigating through this emotional minefield. It’s difficult to speculate how a person is going to respond to losing someone they are so close to.” It’s unclear if the relative was one of the people killed over the weekend in gun-related violence in Philadelphia. “We talked to him and told him that we’re here for him,” guard Phil Greene IV said. “We’re like a family, and we look at each other like brothers so we’re going to be right behind him. The basketball court is where you can clear your mind of things like this. I think he’ll be ready to play tomorrow.” Jordan and the Johnnies played Saturday against Villanova at the Wells Fargo Center. Jordan went for 13 points, six rebounds and two assists in the 57-54 loss. Lavin also expects big men Orlando Sanchez, whose wife recently gave birth to a daughter, and Chris Obekpa, who is dealing with an ankle injury, to be available for Xavier. “His ankle appears to be healing at a good rate so we’re hoping to get him closer to full strength,” Lavin said of Obekpa. “He looked good in practice today. I wouldn’t say he’s at full strength, but he’s at about 85 percent. His progress is encouraging.” St. John’s (18-10, 8-7) is among the last four in on Joe Lunardi’s ESPN bracket and must continue to win to help their NCAA Tournament chances. “I think every game from here on out is a must-win game,” Greene said. “We need to give it all we got because the season is on the line so that’s how we’re going to play.”