Q&A: Only a Freshman, Gary Trent Jr. Already Has a High Major Offer 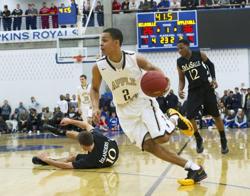 Gary Trent Jr., a 6-3 freshman from Apple Valley, averaged 10.2 points per game as a first year starter for the defending Class AAAA champions.

Gary Trent Jr., a 6-3 freshman from Apple Valley, averaged 10.2 points per game as a first year starter for the defending Class AAAA champions. Trent Jr. helped lead the Eagles to a 27-2 mark this season after falling to Cretin-Derham Hall in the Section 3AAAA title game.

Trent comes from a basketball family. His father, Gary Trent, was one of just three players in conference history with at least 2,000 points and 1,000 rebounds and is the only three-time MAC Player of the Year in MAC history at Ohio University.

Trent was a three-time MAC scoring champion and two-time MAC rebounding leader and is Ohio's all-time leader in career points per game (22.7 avg.).

Trent was selected by the Milwaukee Bucks with the 11th overall selection of the 1995 NBA Draft and enjoyed an 11-year NBA career averaging more than eight points and four rebounds per game with Portland, Toronto, Dallas, and Minnesota.

Gopher Hole recently caught up with Trent Jr. to learn more about his early recruitment.

Gopher Hole: I know that it is early being only a freshman, but what schools are you starting to hear from right now?

Gary Trent Jr.: I have got an offer from Texas Tech and I have also heard from Ohio State and Wisconsin as well. That is a pretty good start. They are nice schools from the Big Ten and some of the best schools in the Big Ten. It is really nice to hear from them.

Gopher Hole: What was your reaction when you heard about the offer from Texas Tech?

Gary Trent Jr.: When I got the offer from Texas Tech, I was really excited. Just another accomplishment and more accolades that I add to what I have already gained. I was very surprised and I was very happy. My family was happy and my dad was happy. All the hard work, we have something to show for it now.

Gopher Hole: Which coach did you hear from for Texas Tech?

Gopher Hole: Obviously, he has some Apple Valley ties, having lived in the city when he was on the Minnesota staff and got to know you that way, right?

Gopher Hole: It is obviously a great honor, but does that make you want to work even harder to prove that you deserve the things that you are getting?

Gary Trent Jr.: Most definitely. Even before this, I was still trying to work hard to get to this goal and now that I am here, it is going to push me to work harder to even bigger and better schools, but Texas Tech is a great school. Give me a Division I offer and I'll be happy to play for them.

Gopher Hole: I know one of the assistant at Ohio State, Jeff Boals. Did he play at Ohio with your dad?

Gary Trent Jr.: Yes. He is almost like an uncle to me.

Gopher Hole: How long have you known him?

Gary Trent Jr.: I have known him for a couple of years. My dad went to college with him and he still talks with his college buddies and they still joke around and text message and phone. I stay in touch with him.

Gopher Hole: Have you had a chance to go to any college games this year?

Gary Trent Jr.: No. Not recently.

Gopher Hole: Have you even though about when you are going to pick a school what are going to be the main factors that make you pick School A over School B or School C?

Gary Trent Jr.: Most likely their playing style. Thecoach. Basically, the playing style and the coach and if they let me play, I'll be happy to go anywhere.

Gopher Hole: Do you have a preference about staying in the Midwest or have you even thought that far?

Gopher Hole: How about the home state school? Are you hearing much from Minnesota?

Gary Trent Jr.: No, I have not heard much from Minnesota at all. We just went to a practice a little while ago as a team. It was pretty cool. Pitino was really getting into them.

Gopher Hole: What was that like to see that type of coaching up close and personal?

Gopher Hole: How about your game? It seems like you have really worked hard to improve your all-around game. What things have you been working on to continue to improve yourself as a player?

Gopher Hole: How much of your dad's game have you ever seen? Have you seen some highlights?

Gary Trent Jr.: He lets me know how he was in college and high school, too. Talking about he had an 81% from the field in high school and that he was one of the only players to ever do that. He brags a lot.

Gopher Hole: Have you seen many highlights of his game because he was an inside guy who shot more than five feet away from the hoop?

Gopher Hole: Your game is obviously a lot different than his.

Gary Trent Jr.: Yes. A lot different. I have seen a couple of his games.

Gary Trent Jr.: Yes. "Shaq of the Mac." I saw his game and how he played and I can see how they related to that.