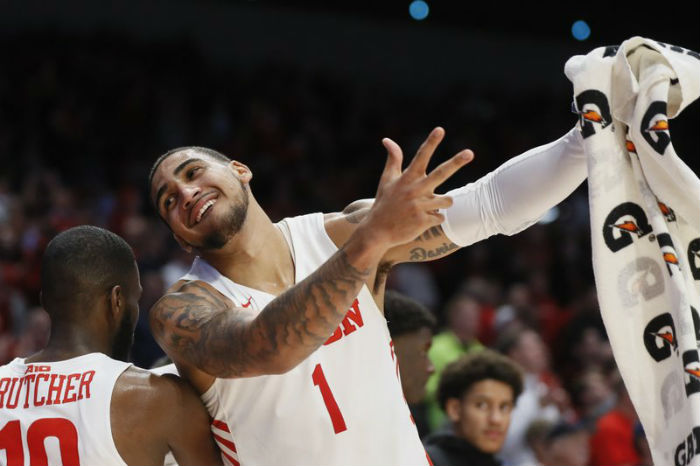 The week did not start great for Obi Toppin or fans of the Dayton Flyers. In a matchup against UMass that was already well in hand, Toppin went down with an ankle injury that took all of the air out of the arena. Luckily, the injury was not enough to keep Toppin out of their next game against VCU where they certainly needed their star player. Toppin scored 24 points in dominating fashion to carry the Flyers to a crucial win on a hobbled ankle.

Toppin is one of the top prospects in this year’s class, so no one would have batted an eye if he would have rested his tender ankle to ensure no further damage. However, Toppin showed remarkable commitment to his team and powered through with an outstanding performance. There is no questioning that Toppin is ready for the next level with his pretty jump shot, stingy defense, and explosive athleticism, but one element that Toppin added this week was passion and devotion to his team and to his sport.

William & Mary went through a major scare last season when Nathan Knight entered his name into the NBA Draft. On second thought, Knight decided to return for his senior season, and he is flourishing because of it. The 6’10 senior is averaging a 20-point double-double and he only has four games this season where he has not reached the double-double mark. This week consisted of two twenty-point performances and at least 13 rebounds in each contest.

His physical presence down low also averages a block and steal per game on the defensive end. Offensively, Knight has developed a three-point shot, something he did not have when he briefly entered the NBA Draft a year ago. This addition to an already impressive arsenal, which can translate to the next level, opens the door for Knight to skyrocket up draft boards

Another 6’10 forward who is dominating college basketball is the leading scorer on the top team in the country. The Zags are a balanced team with six players averaging double-figures, but Filip Petrusev leads the pack with just under 17 points per game. It is hard to have breakout games with a team so well-rounded, but Petrusev’s brilliantly consistent game is well worth recognition.

This consistency for Petrusev has boosted his stock on our big board to a top 40 prospect. The stellar sophomore is a player to keep an eye on for the rest of the season, including in the NCAA Tournament where he plans to lead a remarkable run to Gonzaga’s first NCAA championship.

Much like many other ranked teams in the country, Wichita State could not come up with a win away from home. A loss against Temple on Wednesday handed the Shockers their second loss of the season. A major reason why the Shockers could not come away with a win was because their leading scorer, Erik Stevenson got himself into foul trouble early for the second straight game. The limited minutes for Stevenson led to a goose-egg on the scoresheet on eight shots.

Earlier in the week, Wichita State managed to win at Connecticut, but Stevenson’s minutes were once again limited thanks to early foul trouble. Despite getting the win, the Shockers would have been much better off with Stevenson’s leadership down the stretch, however, the sophomore was watching from the bench for the final eight minutes. If Wichita State is going to go anywhere in March, Stevenson will need to be on the court far more often than he was this week.

Carlton Bragg started his career as a top 25 recruit heading to the Kansas Jayhawks. Following some off the court issues, Bragg decided to take his talents to Arizona State for a fresh start. Bragg failed to play a single minute for the Sun Devils due to more off the court issues, so he transferred again, this time to the New Mexico Lobos. Here, Bragg found a home and played for a season and a half with impressive numbers, but a recent arrest of the star forward has all but likely ended Bragg’s basketball career for good.

If you ask anyone who knows me, they will say that I am a huge fan of the aesthetics of an athletic event. Whether it is the uniform matchup, the scoreboard displayed on the TV (good job Sunday Night Football), the camera angle, or TV definition, I LOVE the aesthetics of the game when it comes to overall viewer enjoyment. With that said, I took the time to look at some of the coolest and most iconic basketball courts in all of the mid-major schools in college basketball.

Components such as history tradition, flair, and creative design were considered when the list was compiled.

The Memphis Tigers needed a little flair to jump back into the national spotlight, so they brought back former player Penny Hardaway and created a court that is an absolute spectacle. With a blue court outside of the three-point lines and blue tiger claw marks inside the paint, the court may attract as many fans as the team set up for a decade of dominance in the American Athletic Conference.

Some teams just are not all too successful in certain sports. Thus, creative measures need to be taken in order to sell tickets and generate interest in the program. Florida International interpreted that as creating a beautiful court that captures the culture of the state of Florida, and it worked on me. With palm trees designed at the front of the court and ocean water showcased on the far sideline, the FIU basketball court is something to behold.

Long Beach State may not have a lot of tradition, but they do have a lot of history. No one is really sure what their nickname is since they fluctuate between the three above. Their official home court is also tricky to discover. The one that I am referring to is the one debuted in 2012 that highlights “Beach” in the center of the court and is surrounded by yellow palm trees in the middle of the court. The 6-13 basketball team does not attract a lot of fanfare but the {enter nickname here} can grab loads of attention through the beauty of their court.

One thing every school strives for is an intimidating home court advantage. San Jose State took this to a whole new level. The Spartans have, you guessed it, FIVE ACTUAL SPARTANS at the forefront of their homecourt. The graphic nearly pushes the school logo off of the entire court! I am not sure if this design is more intimidating or distracting, but it is interesting and creative for sure, warranting a spot on this list.

There is flair, there is history, there is creativity, and then there is tradition. And you cannot find any more tradition than at the Palestra. Where else is a 93-year old, 80-degree gymnasium an acceptable place to play a ranked matchup in conference play? That is where the #21 Penn State Nittany Lions and the #23 Iowa Hawkeyes played two Saturdays ago, and hopefully there will be plenty of more games played at the historic arena.