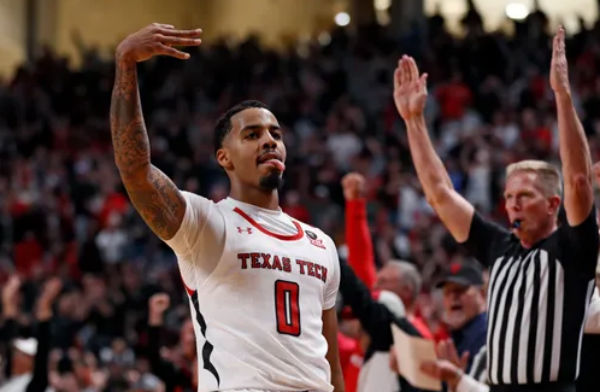 While Kyler Edwards (pictured) is not a name many people had heard of going into the season, but the 6’4 sophomore has really showed up for the Red Raiders in a big way. After Texas Tech’s two game skid in the Big Twelve, they needed to bounce back and did just that by beating Kansas State and Iowa State. Edwards started the week off great against Kansas State scoring 24 points, a huge jump for the player who is averaging around 12 ppg this season. But his hot week didn’t stop there when he scored 22 against Kansas State, shooting 66% from the field.

Baylor has been playing off the charts lately, most notably being the new number one team in the nation, and rightfully so. They played three games this week and won all of them, and Jared Butler played solid in almost every game. The first game of the week against Iowa State, Butler dropped 19 points with five assists. Against Oklahoma State, Butler scored 17 points to secure a victory against the Cowboys, but the beautiful thing about Baylor this year is even though Butler only scored four against Oklahoma, they were still able to pound out a win thanks to the rest of the team playing their part.

Another player this week that is not necessarily on the top of anyone’s draft boards is Brady Manek, but he really showed the country what he was capable of with his performance over the past week. In Oklahoma’s win against TCU, Manek scored 31 points and pulled down nine rebounds, and then two days later against Baylor he scored 21 with 10 rebounds. In this game against Baylor, the Sooners only lost by four, and Manek was really putting in work to try and secure a quality win for his team. He has been putting up impressive numbers recently and is definitely worth a look into if you’re looking for decent sized forwards that are winners and hustle on the court.

Azubuike is not stranger to the “Who’s Hot” section, and this past week he has earned his spot back. Two wins back to back for Kansas was highlighted by Azubuike’s performances. On the 14th against Oklahoma, he scored 16 points, pulled down 14 rebounds, and had three blocks. Then a few days later, he finished the game against Texas with 17 points, nine rebounds and one block. As always his field goal efficiency was extremely high with 70% and 77% respectively.

One of the best shot blockers in the Big Twelve if not the nation has been plagued lately by poor team and personal performance. He finished the game on the 15th against Texas with no points, one block, and three personal fouls. Oklahoma State lost the game and Yor was no help to the Cowboys struggle against the Longhorns. Then the next game against Baylor, he scored eight points, eight rebounds, no blocks, and two personal fouls. For someone who is relied on to make an impact for Oklahoma State, he has just not been performing to the level he could be.

Rasir Bolden is a transfer from Penn State who has made a real impact for the Cyclones while Tyrese Haliburton was injured, but lately his production has fallen into the deep end. In back to back losses against Baylor and Texas Tech, Bolton scored nine and seven points respectively and had three and four turnovers a piece. For being the number two guy in Iowa State, he is expected to perform well in order to get Iowa State to win games, but this past week he has not been. Hopefully he can get back into the swing of things, as they have a big game against Auburn coming up.

Obviously, this game has HUGE implications on the winner of the Big Twelve conference. The matchups remind me of a big time final four game, Dotson v Butler being the leading scorers, Azubuike v Gillespie being the leading big men. Definitely a game to keep a careful eye on come late February, because if both teams continue to play as well as I think they will, this game could be a preview come the Big Twelve tournament.

UPSET ALERT!!!!! As we all know, there are no easy road games in the Big Twelve, especially on the last game of the season in Morganton, West Virginia. Baylor may be taking it easy going into the Big Twelve tournament and potentially having the one seed in March Madness, and West Virginia may be looking to get one more signature to add to their resume.

Texas Tech is tough this year at home, and Kentucky may find it hard to play in Lubbock, Texas this upcoming Saturday. Texas Tech has filled their shoes of what people more of less expected them to be this year and Kentucky is a big name that Texas Tech would love to have on a resume. ESPN is giving Texas Tech a 71% chance to win this game of the better ranked Wildcats in what should be one of the more interesting games of the Big Twelve/SEC challenge.

Another Big Twelve/SEC challenge game is the Baylor/Florida matchup on Saturday. One problem with being number one is that teams are looking to knock you off any chance they can get. Unranked Florida has a great opportunity to beat the top team in the nation this weekend as Baylor is traveling to Gainesville to play the Gators. ESPN once again favors the underdog, giving Florida a 63% chance to win this game. It will be interesting to see how Baylor responds to the hostile Gator crowd.