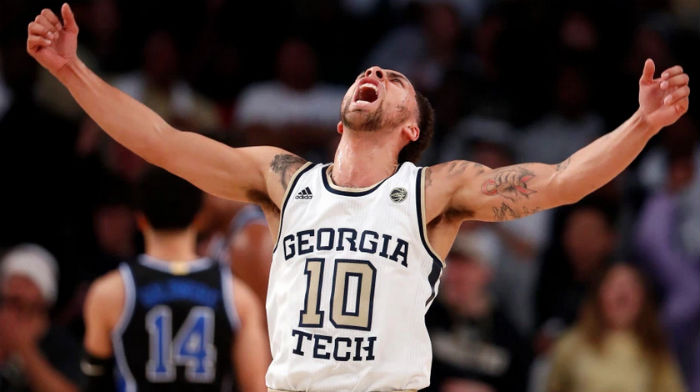 After missing the early portion of the season with an injury which kept him out until the end of December. Alvarado, who coach Josh Pastner referred to as the “quarterback of the team” a while back, is the heart and soul of this Georgia Tech team, along with fellow guard Michael Devoe. While Alvarado was out with his early injury, Devoe stepped up and was among the top scorers in the ACC for that period of time in his absence. Alvarado eventually came back, and even as of recently, it seemed as if the Yellow Jackets were still getting accustomed to being at full strength. Alvarado was seemingly getting better each day, and even notched his first career double-double against Louisville, a 17-point, 10-rebound effort against Louisville. Then, on Saturday, 1/25, Devoe went down with a foot injury, and Tech was essentially back to square one, playing without one of their stars. This time, Jose Alvarado stepped up and led his team to a big 64-58 win against NC State, playing his best game in the college ranks. He put up a 26-point, 8-rebound, and incredible 9-steal stat line. The nine steals were a school record, and an extremely encouraging sign for Alvarado and the 9-11 Georgia Tech Yellow Jackets, as they look to make a run to get themselves back in the NCAA Tournament conversation.

In today’s era of college basketball, it is tough to find longevity, especially in the major conferences. With the rise in popularity of the one-and-done and/or overseas routes, and the large amount of transfers that occur yearly, we rarely find college players at the highest level who are at a school long enough to make an impact at a program. On January 25th, that is exactly what Markell Johnson did. The senior became the 53rd player in the storied NC State program’s history to score over 1,000 career points. He also became only the 4th player in Wolfpack history with at least 1,000 career points, 500 assists, and 125 steals. It is a tremendous achievement for Johnson, and the recognition is a fitting award for his loyalty to the program.

Don’t look now, but Jim Boeheim and his young and inexperienced Orange team are on a five-game win streak in ACC play, and currently sit at 13-7 overall, and are fourth in the ACC, with a 6-3 conference record. It is the first five-game winning streak for ‘Cuse since the 2016-2017 season, and is by far the most impressive stretch of basketball this team has played this year. It is especially encouraging due to the fact that they haven’t played their best basketball per se, yet have found ways to win close games, with close wins over Virginia, Boston College, Virginia Tech, Notre Dame, and Pitt. Elijah Hughes has been the go-to guy for Syracuse during this season and win-streak, but Marek Dolezaj and Buddy Boeheim have also stepped up and been more consistent. Getting the experience of winning close, hard-fought games deep into conference play is an extremely valuable experience for a young team like Syracuse and could be extremely beneficial come tournament time.

It has not been an easy season for Jim Larrañaga and the Hurricanes. They are currently riding a four-game losing streak, with losses at NC State, vs Florida State, and at Duke and UNC. They have now lost to Duke by 30 or more points in both matchups against the Blue Devils this year, and lost by 23 to a struggling UNC team on January 25th. While they are still over .500 at 10-9, they are now 2-7 in ACC play and do not seem to be getting any better. On a positive note, Chris Lykes has enjoyed a breakout year as the ball-dominant playmaking guard. Without him, though, the Hurricanes would be in a much worse place.

The Irish are on a two-game losing streak, coming off a two-point loss to a surging Syracuse team, and a one-point loss to the red-hot Florida State Seminoles. In the loss to Syracuse, the Irish played a lackadaisical game, until an 18-4 second half run brought them all the way back, just for them to give up the lead and lose in the end. They followed that performance with another heartbreaking loss to FSU, where big man John Mooney’s 12-game double-double streak was broken. The loss moved them to 11-8 on the season, but 2-6 in conference play. The Fighting Irish will need to move past this tough week quickly, as they are still in the midst of a possible tournament run and will likely find themselves on the bubble of getting in to postseason play come March.

Top 5 best coaches in the ACC this year

This years ‘Cuse team is young and has gone through some growing pains this year, but the legendary coach has them playing some of their best basketball of the year right now and has the team clicking on all cylinders. Elijah Hughes has been the main scorer on the team, but when the secondary players such as Marek Dolezaj,Buddy Boeheim, and Joe Girard III are playing well, Syracuse becomes one of the toughest teams to stop in all of the ACC.

Coming into the season, there were a lot of questions about Virginia Tech, such as who was going to main scorer for them this year. With no real proven players, expectations were not high for the Hokies. Then, coach Mike Young introduced redshirt freshman Landers Nolley II to the world, and turned Virginia Tech into one of the pleasant surprises of the season, as they sit at 14-6 on the season and looked geared for a tournament run.

Louisville is one of the most talented teams in the entire country, and have used that talent to get to 17-3 on the season, and sit first in the conference with an 8-1 record. They have won six games in a row, and look to be one of the toughest outs come tournament time. The only knock against this team is their inability to win against the best teams they have faced this year. They lost by 13 to Texas Tech in early December, and then had back-to-back losses to Kentucky and Florida State in late December and early January. In order to be the best, you need to beat the best, and if Chris Mack and Louisville can figure out how to do that consistently, they will be one of the favorites to reach the Final 4 and beyond.

The Hall-Of-Fame coach has another very talented roster, and in a year where the top-ranked teams are changing constantly, Duke has been one of the only teams to have been at the top of the rankings for the entirety of the season. The only stains on Duke’s record for this year has to be the unforgettable home buzzer-beater loss to Stephen F. Austin, where the Blue Devils could not execute their final play coming out of a timeout, and instead turned the ball over and let one opponent steal the ball and bring it the length of the floor for a game-winning wide-open fast break layup. The other stain comes from their 79-73 loss to Louisville on 1/18, as the Blue Devils did a great job in shutting down Louisville star Jordan Nwora, but still could not find a way to win. Regardless of the bad moments of the season, Coach K has got his team at 16-3 and looking like a true title contender.

The Seminoles found themselves unranked in both the AP and Coaches Pre-Season polls, but did not let the lack of recognition sidetrack them in their goal of proving they are one of the best teams in all of America. Currently, FSU is on a 10-game winning streak and enter Tuesday’s matchup with Virginia at 17-2, looking to match their best start in school history set in 2016-2017 with a win. The Seminoles do not have a true “star” player, but have a balanced offense and pride themselves on the defensive end as one of the best defensive teams in the country.