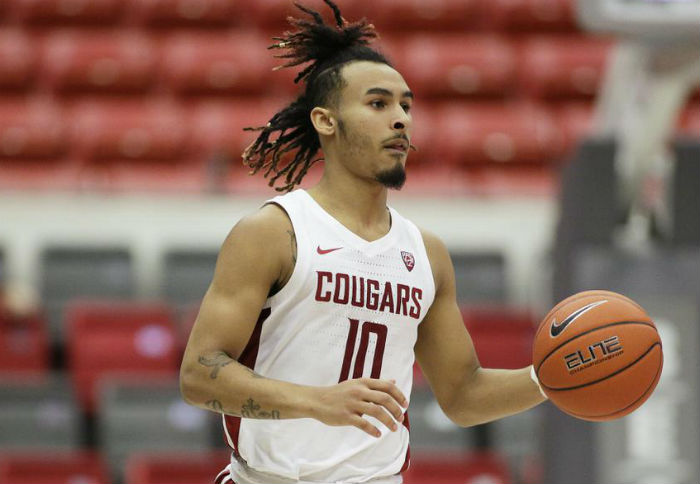 Pac-12 Player of the Week

The 6’3 guard on Washington State had himself a huge breakout performance against Oregon State following logging a productive 35 minutes in a huge win against 8th ranked Oregon. Bonton (pictured) had 12 points against Oregon to go along with six assists, a blocked shot, and two steals.

He clearly kept the momentum and confidence going into the next game two nights later on January 18th against Oregon State. Bonton did everything for his team posting a career high 34 points to go with eight boards, and eight assists. This young man made sure to get it done on the defensive end as well once again recording two steals and a blocked shot. The huge win over a strong Oregon team and then a monster performance against the Beavers ought to be quite a confidence boost for Bonton. For Bonton to step up the way he has means CJ Elleby doesn’t have to constantly carry the load on offense. When both of these guys are on, it equals wins for this Cougar team. If they can beat Colorado in their next matchup, it would be three wins in a row for them in conference.

The Trojans had a blowout win over Cal on January 16th where Jonah Mathews had 19 points on five of nine shooting with five boards and three assists. USC made life really hard for Cal from beyond the 3-point line. The Golden Bears were held to just 5/25 shooting from 3-point range. Coming back empty on that many possessions is hard for a team to come back from and the Trojans didn’t make it easier, holding Cal to just 33 percent from the field.

On January 18th, it took overtime for the Trojans to defeat Stanford but they got it done. Onyeka Okongwu had a nice game with 22 points on 8/11 shooting with nine boards, three assists, and four blocked shots. Jonah Mathews was another big performer for USC with 19 points, five rebounds, three assists, three steals, and a blocked shot. Watch out Pac-12, the Trojans have won three in a row.

It has been a rough 2020 for the Utes having lost their last four games. Arizona handily defeated the Utes on January 16th 83-67. One glaring stat from the game is that Arizona had 23 assists as a team while Utah only had 11. That means the Utes were playing more isolation basketball which clearly does not equate to wins for them. The Wildcats also shot 51 percent from beyond the 3-point line while Utah shot just 35 percent. On January 18th, Utah had a chance to bounce back against Arizona State and simply went ice cold from the 3-point line. The Utes shot just 25 percent from downtown while allowing the Sun Devils to shoot 61 percent from deep. You cannot win a game with that big of a discrepancy. Utah also did not take very good care of the basketball, turning it over 18 times. Maybe Timmy Allen can put together a big performance and have the cast around him score efficiently as well and this team could bounce back.

Top Five Forwards in the Pac-12

This 6’7, 5th year senior has been a beast his entire collegiate career, especially on the offensive end. He is averaging just shy of 20 points per game and just under seven rebounds per game while shooting 48 percent from the field. In the last four games, Tinkle has scored 15 points or better all against conference opponents. He also has nine steals over that stretch which is particularly impressive for a guy who’s team relies on him night in and night out on both ends of the floor. He can just about do it all.

The Cougar forward had an excellent week and helped his team win two straight. On January 16th, Elleby had a 25 point double double performance with 14 rebounds against 8th ranked Oregon. The 6’6 sophomore had another big offensive performance on January 18th against Oregon State. He contributed 22 in 38 minutes to go along with nine rebounds and five assists. When this young man is hot, he is a force on the offensive end no matter who the opponent is. Expect Elleby along with Isaac Bonton to be the focal points of the Cougar offense moving forward.

The 6’9 freshman Husky is averaging just over 18 points per game which is 6th in the conference. He only had 13 points and five rebounds against Oregon State but made sure to contribute defensively recording four blocked shots and a steal. Once it was time for Washington to face Oregon, Stewart had one of those performances that we all know he is capable of. He had a monstrous 25 points, 19 rebounds, five blocks and two steals. If he can get closer to those numbers on a regular basis, this young man will continue to draw lots of eyes heading into the later part of the season.

In just 27 minutes per game, this young man is averaging over 16 points per game with nearly six rebounds per game shooting 61 percent from the field. He did just about everything for Stanford in the close overtime loss against 8th ranked Oregon. Da Silva had 21 points on 69 percent shooting. He also stuffed the stat sheet with nine rebounds, three assists, two blocked shots and two steals. The 6’9 junior from Germany is quite a handful for opposing defenses and can do a lot of things on both ends of the floor. Few in the Pac-12 are as versatile as this guy.

Despite his team struggling as of late during conference play, Timmy Allen has been a standout this season. He’s averaging a hair under 20 points per game and 7.5 boards on 47 percent shooting from the field. Allen had a nice double double performance against Arizona State on the road where he had 18 points, 10 boards, four assists and four steals. He is extremely active on both ends of the court and a high energy player. If he can improve his outside jumpshot, he will have little to no weaknesses.